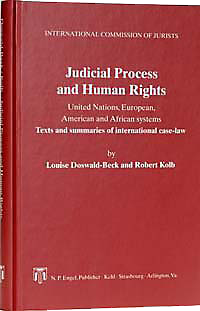 Texts and summaries of international case-law

by Louise Doswald-Beck and Robert Kolb

Students providing proof of their status benefit from a 50 percent reduction.

This book is a practical guide to the interpretation of the right to liberty and security of person, the right to fair trial, the prohibition of torture, inhuman or degrading treatment or punishment, including the treatment to be accorded in detention, and derogation in states of emergency. Unlike many other texts, it covers the interpretation by all four major systems, based on:

• the UN Covenant on Civil and Political Rights, and the UN Convention against Torture;

• the African Charter on Human and Peoples’ Rights.

The first two parts are sub-divided into the various facets of the rights typically found in all four systems.

Each Part includes the most important relevant international texts, or parts of texts, followed by caselaw from each system, i.e.

This book is published in English and in French (the French version is entitled « Garanties judiciaires et droits de l’homme »). It will be a useful teaching and reference work for both academics and legal practitioners.

• Subject index (references not limited to where a particular word appears, but also where the concept appears, albeit expressed in different terms).